Integrated system for energy conversion from renewables or recovery.

iPCS is a modular power electronic system, for the conversion of mechanical energy into electrical energy and its feeding into the grid, to be used with a high efficiency three-phase generator.

The idea of the iPCS came up in the context of the PIACE Project (Industria 2015), in particular from the need to exploit, by combining it, the energy coming from various renewable or recovery sources (wind, co-generation from methane, solar thermal or other heat available at low temperature).

Each iPCS module consists of a three-phase inverter (which will be connected to a generator powered by a certain source, such as a co-generator) and a single-phase inverter capable of feeding power into an AC grid. The single module is available in two versions, capable of converting 2 or 4 kW of power. Customized set ups with output to three-phase grid can be obtained, through the use of 3 iPCS modules (or multiples of 3).

Within the same plant, each iPCS can convert the power produced by a power source, to feed it into the same AC mains. In this way, power is shared between different generators and users, supplied by the same grid.

Unlike traditional generation systems, iPCS offers many advantages, such as:

iPCS includes a high-performance real-time control unit for both generator side and grid power feed, developed on the basis of Koala’s team expertise in this field. In particular, the generator control can include a start-up phase, i.e. managing motor operation. In the typical case of Permanent Magnet Synchronous Machine (PMSM), Koala Electronics is able to offer state-of-the-art control without a position sensor (“sensorless” control).

An iPCS module or set of modules is normally combined with a process controller and coordinator (SVS) and a user interface (HMI), which complete the system, providing all the functions necessary for a micro-generation plant. 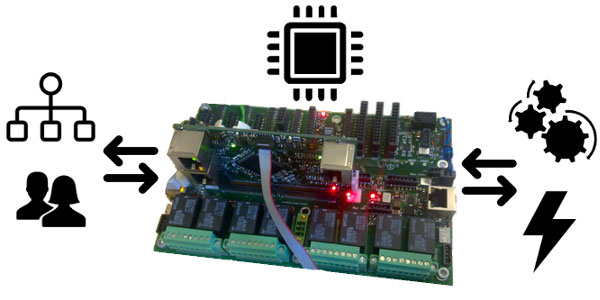